While an increasing number of countries are approaching malaria elimination, others are seeing increasing infections and deaths1. This creates two distinct sets of challenges: (a) to optimize case management and drive down case incidence and mortality in high-burden countries; (b) to protect parasite-free communities from reinfection in countries moving towards sustainable elimination. In addition, there is the threat of drug resistance. Resistance to artemisinin combination treatments (ACTs) is a reality in the greater Mekong sub-region2,3 and would render global malaria control and elimination targets4 unachievable if it were to become widespread.

The development of next-generation malaria medicines will play an important role in addressing these challenges. With its partners, MMV has elaborated target candidate profiles (TCP), describing the types of molecules, and target product profiles (TPP) describing the medicines into which these molecules must be combined for specific use-cases5. Use cases are defined by unmet medical needs for malaria control and elimination. 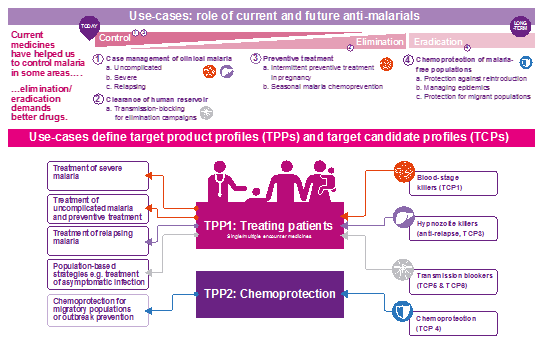 Today, 48 projects in the MMV-partnership R&D portfolio are being evaluated against these profiles. These include 14 compounds in preclinical and clinical development, 9 with novel targets/biological pathways versus those of ACTs. A further 20 projects in candidate profiling/lead optimization and 14 in hit-to-lead are focused on 12 new mechanisms of action. Importantly, there are seven series where no resistance could be generated in vitro.

MMV’s network of partners has assembled an array of laboratory assays to profile compounds against each stage of the parasite lifecycle and determine their TCP “fingerprint”6. Translational sciences and experimental medicines platforms, including the combination drug selection tool, humanized SCID mouse model for blood-stage infection and controlled human infection models (CHIM)7, are being utilized to identify optimal combinations of novel compounds and expedite their development. It is anticipated that next generation medicines will be submitted for regulatory review from 2023.